Pour this red pepper sauce all over a cauliflower steak for a saucy tasty meatless dish! Served on a bed of lentils with capers and mint, you won't believe it's vegan and gluten free.

As I write this post my dog, Breslin is breathing on my keyword and wants to go to the park. Feeling major “mom guilt” right now. I know, I know “he’s just a dog” but anyone who says that obviously doesn’t have a dog.

Moving along, I am SO excited to bring you these cauliflower steaks with lentils and red pepper sauce. This recipe was developed a little bit out of luck. I didn’t mean to buy mint at the store and I happened to have a jar of roasted red bell peppers in the fridge so I just started throwing things together. I had to remake it a couple times and have some people at work taste it but all the feedback came back positive!

PS: If you love lentils--I love this quinoa lentil salad for quick lunches in the summer!

Before we jump into the cauliflower steak part, I wanted to give this red pepper sauce a chance to shine. First off, it’s extremely easy to make. Ready for the ingredients?

Blend everything in a blender for about a minute and watch that creamy light red color come through. I used jarred roasted bell peppers, if you roast the bell peppers yourself, this sauce might need a bit of extra liquid to it. So I would suggest adding water, since that’s the jarred bell peppers have in it.

Alright now that we are through the red pepper sauce, now comes the cauliflower steaks. Mmmhm. Yep, that’s right no red meat here. Spetical? Just try it. Sean didn’t think he would like it and now he eats it for days.

How to Cut into 'Steaks'

The key to a good cauliflower steak is not cutting off too much of the stem. You want to make sure to remove any leaves and greenery but if you can, keep the stem intact so when you go to cut the cauliflower into strips they don’t break and fall all over the place. I learned this the hard way.

Depending on the size of the cauliflower, it should give you 4-5 good inch pieces of ‘steak.’

What to serve with cauliflower steaks?

I like to make sure each meal has some protein in it so I’m not hungry later. So I served this cauliflower steak recipe atop a bed of lentils. You can use black or brown lentils, both work here. Some grocery stores even carry pre-made lentils that you can just pop in the microwave.

I loved the garnish of mint in this recipe. Plus, I always have mint around because it’s about the only plant in my garden that I can’t kill.

Optional to serve with some capers ! Bonus points if you fry them a little first. They lend such a crispy salty taste mhmm.

Ok, I better take Breslin to the park now, he has been so patient!

Pour this red pepper sauce all over a cauliflower steak for a saucy tasty meatless dish! Served on a bed of lentils with capers and mint, you won't believe it's vegan and gluten free.

½ lb of lentils (black or brown)

You might have some lentils left over, throw it on top of some salads or use it in a stir fry or grain bowl.

Fried capers: Option to fry the capers here, it's a little extra work but worth it! Regular capers are also tasty. 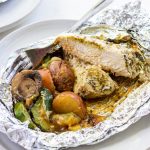