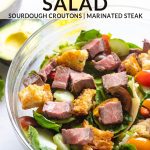 This steak panzanella salad recipe embodies the flavors of summer with avocados, tomatoes, garlic and basil. The dressing is a medley of lemon, red wine vinegar, olive oil and basil that gets tossed in with spinach, cucumber and sourdough croutons.

Hiya friends! The weather is warming up, lawns are being mowed and people are firing up their grills. I've always felt a little intimated by the grill, mainly by the fact that propane scares me becaue I always think I'm going to blow up. But now that I have a basic understand of how not to do that, I feel more confident. So this week I give you… Steak Panzanella Salad!

I know that I've said no to red meat in the past. This is true, however sometimes I let flank steak and filets slide because well, they're good and my husband likes them.

Why a Panzanella Salad with Steak?

A Panzanella salad recipe is traditionally made with stale bread and tomatoes. It generally has basil, olive oil, vinegar and end of summer vegetables. I paired it with steak because it's a great match for grilling out in the summer. When comparing other types of protein, steak just tasted the best.

Baby spinach or arugula: I would recommend baby spinach over regular spinach in this recipe just because the smaller leaves are easier to mix and they're coated better by the dressing that way. Arugula would also be a great option, both provide fat-soluble vitamins (A,E,K) and provide anti-inflammatory benefits.
Tomatoes & cucumber: Is it even a summer salad without these two vegetables? I prefer English cucumbers, but if you only have regular that's fine too.

Flank Steak: I prefer flank. It's a leaner cut, which means less saturated fat and cholesterol than others. In an article published by the AHA , the importance of checking your cholestrol levels for all individuals is emphasized. This study also shows that grass-fed beef contains less cholesterol and have a higher antioxidant content than conventionally fed beef.
SOURDOUGH CROUTONS: How could I forget about these little gems? Perhaps one of the best markers of a true panzanella salad. I used sourdough bread, but ciabatta would be a good option too. One thing to note that if your bread is stale, it will cook faster. I learned this the hard way 🙁

How to make Steak Panzanella Salad

In a large bowl add the garlic cloves, olive oil, red wine vinegar and lemon. Then chop the basil and add in the quartered tomatoes. Let this marry for awhile as you chop up the rest of the ingredients.
For the flank steak, you will want to marinate it for 30 minutes or longer. I used a simple & quick marinade of things I had in my cabinet. I adapted the recipe to this...

Of course you could always leave off the steak and make this a meatless meal. Just make sure you get every drop of the dressing at the bottom of the bowl 🙂

Hope you guys love this steak panzanella salad recipe as much as I do!

This Steak Panzanella Salad recipe embodies the flavors of summer with avocados, tomatoes, garlic and basil. The dressing is a medley of lemon, red wine vinegar, olive oil and basil that gets tossed in with spinach, cucumber and sourdough croutons.

Croutons: If the bread is stale or if the sheet pan your cooking on is dark, the bread will cook faster.