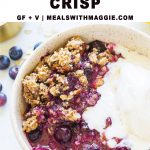 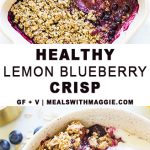 This healthy blueberry crisp is vegan and gluten free! Made with oats, chia seeds, almonds, cinnamon and cardamom. It’s a refreshing dessert that can serve a crowd.

I love this lemon blueberry crisp for so many reasons. Can we talk about the smell of cardamom in the oven? It’s what heaven smells like and the cardamom combined with the cinnamon, almonds and oats is the perfect hearty combo. It’s too healthy to be a dessert!

Let’s talk blueberry crisp, shall we?

Cobbler vs. Crisp vs. Crumble

To preface, I didn’t know what the difference was. I actually thought this recipe was a cobbler before, but turns out it's a crisp! A cobbler has a more biscuit or pie like filling on top, whereas a crisp is traditionally made with nuts, oats, flour, butter, and sugar. A crumble has more of a streusel topping with flour, sugar and butter.

How to Make a Healthy Blueberry Crisp

What you will need:

First, you need to pulse the almonds and the oats together. This will create a nice hearty base for the crisp topping. I have not tried this using almond flour, but I’m not sure it will work. Almond flour is finer and super absorbent, whereas almond meal (ground almonds) has a more course texture that will hold up well with the oats.

Combine the remaining dry ingredients to the pulsed almonds and oats in a large bowl.

Can you use frozen blueberries in this blueberry crisp?

Yes, but thaw and drain before mixing with the other ingredients. Once you have the crisp topping finished, macerate some of the blueberries with the lemon zest, maple syrup and vanilla extract. Add the ingredients to the bottom of an 8x8 pan and crumble the crisp on top.

How long is it good for?

7-10 days in the refrigerator

Is this recipe gluten free?

I love to serve this lemon blueberry crisp with some vanilla bean ice cream. It cuts down the acid from the lemon and blueberries. In order to keep it vegan friendly, substitute dairy free ice cream.

Have some leftover? Eat it at breakfast with some yogurt! It has 5 grams of fiber and 5 grams of protein per serving!

This healthy lemon blueberry crisp is gluten free and vegan. It serves a crowd and is always a favorite summertime dessert!

It's best served with ice cream!