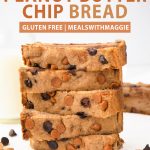 So this post took me some time to come up with a name! Lol I don't think chocolate and peanut butter chip almond flour bread is going to stick so ill just call it chocolate and peanut butter chip bread. I've been waiting for a post like this on my blog. In fact, I only have one other bread recipe and its a pumpkin oat bread so I knew I was long overdue for another bread post.

Let's talk a little bit about substitutions in this recipe, because I know you all will have some questions for me. Which I can't blame you! I substitute when cooking all the time but baking is another story! I have only tested this bread using almond flour (not almond meal!) and coconut flour (like the recipe says. I have not tested it using gluten free flour, white or whole wheat. I don't think regular peanut butter would work in the recipe because (and I have tried this one) it weighs down the bread because the almond flour is already pretty dense and moist. Moral of the story, don't substitute anything if you can try!

Don't forget to Pin It on Pinterest for later!