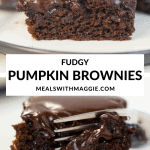 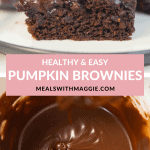 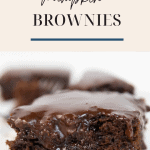 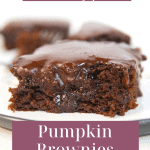 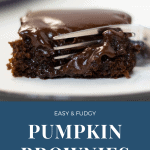 These fudgy pumpkin brownies are exactly that, dense on the inside with a gooey middle and a smooth frosting on top to finish. No one will expect that they are surprisingly on the healthy side made without butter or eggs!

Alright you guys, I've tested this recipe out three or four times and I am shameless to say that Sean and I finished each batch within 24 hours of making it😂

When there are leftover brownies in the house, how can you not have one for a snack between breakfast and lunch and lunch and dinner? LOL.

Anyways, these pumpkin brownies are guilt free being made with Greek Yogurt and canned pumpkin! I mean you shouldn't feel guilty anyways eating desserts but after you've eaten the whole batch in one sitting... the guilt tends to creep in.

These pumpkin brownies are made with cocoa powder, which you can find at any grocery store. I decide to leave out chocolate chips because I thought the frosting on top was decadent enough but if you want to add some chocolate chips into the mix, feel free!

I used 100% pure canned pumpkin for this recipe. The combination with the pumpkin and Greek Yogurt gives the brownies a nice structure without the addition of eggs.

You will only need four ingredients for this chocolate frosting.

The coconut oil gives the frosting a nice glossy texture that will harden up after the brownies have cooled down.

I would recommend putting the frosting on the brownies about 5-10 minutes after you pull them out of the oven. The brownies will still be warm enough to allow the frosting to be drippy and give you a gooey middle.

Do you refrigerate pumpkin brownies?

Best consumed at room temperature or slightly heated up in the microwave.

These fudgy pumpkin brownies are exactly that, dense on the inside with a gooey middle and a smooth frosting on top to finish.

Recipe adapted from The Baker Mama