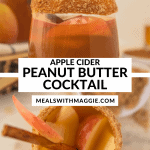 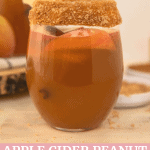 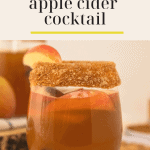 Since moving to our new house, we've been taking some cocktails on our nightly walk around the neighborhood. I've been making this hot peanut butter apple cider cocktail for us and it's sooo tasty.

I love this recipe mainly because a hot alcoholic drink is always intriguing when the temps get below 60. Sean has really been getting into whiskey drinks lately, so this is a drink that we can both enjoy.

If you guys haven't tried peanut butter whiskey yet, what are you waiting for?!

I don't even like whiskey, but this skrewball peanut butter whiskey is no joke!

Here are a couple brands that I found at my local Meijer for peanut butter whiskey:

Skrewball was the first brand on the market and, to be honest, I think it is superior as well. Apparently the inventors of Skrewball live in Southern California and owned a bar where one of the shots was whiskey and peanut butter. People liked it so much they decided to make it a business and here we are.

So many people ask me...what does it taste like?

If I haven't convinced you to try it yet, you should try it in a peanut butter and jelly cocktail.

To give this drink a little more jazz, I decided to put a peanut butter and cinnamon brown sugar rim on the glass.

It's such an easy technique that will really impress guests and it looks realllllly pretty.

To make this peanut butter apple cider drink you will first need to warm up the apple cider. Pour however much cider you will need for the drinks (¾ cup= ~1 drink).

Turn the heat on low. This is important as you don't want to bring it to a boil, because the apple cider will start to denature and separate. Just leave it on low for about 3-4 minutes to heat up slowly. Add in 2 cinnamon sticks (if you have them) to amp up the flavor.

Dress the rim of your glass with the creamy peanut butter and cinnamon brown sugar. Then pour a shot of peanut butter whiskey in your drink glass.

Slowly pour the hot apple cider over the whiskey and serve with an apple slice or cinnamon stick.

Hope you love this recipe!! Don't forget to PIN IT for later!