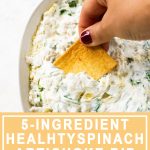 This healthy spinach artichoke dip only contains five ingredients! It's super easy to make, prepare and travel with. Naturally gluten free and can be made in only one dish!

Summer isn't officially over, but it does feel like it with the cooler temps, school starting and football being back! You guys got so excited when I posted these buffalo chicken wontons that I had to do another tailgating recipe. Enter healthy spinach artichoke dip. Did I mention it was only 5 ingredients? Oh that's in the title. Well, yep I tried to make this one easy for you guys since most of the time we are all scrambling to find something to bring to a tailgate or to watch a game at a friend's house. This healthy spinach artichoke dip could not be any simpler.

I wanted to make note, this feeds a lot of people. So if you are only going to a party with 5-10 people maybe you want to cut this recipe in half.

Yes, you guessed it. Spinach artichoke dip with yogurt. That's the ingredient to make this healthy spinach artichoke dip *healthier,* although I would say that the neufchâtel cheese does help in this too! Much lower in fat than regular cream cheese and tastes the exact same to me!

Can you make this spinach artichoke dip in a crockpot?

Yep! Throw everything in a slow cooker on high heat for about an hour or two and you should be good to go! Just make sure to stir it every now and then.

Can this spinach artichoke dip be served hot or cold?

I think it's best served hot. The cream cheese can harden a bit when it's cold and it tastes more cheesy than spinach artichoke-y.

I served this dip with pita chips but tortilla chips, pretzels, carrots, celery - really any scooping vessel will do!

This healthy spinach artichoke dip contains only five ingredients! It's super easy to make, prepare and travel with. It's also naturally gluten free and can be made in only one dish!

If you want to get fancy, put some parmesan and/or mozzarella cheese on top for the final 5 minutes of cooking and set the oven to broil.

If you don't have a shallot, you can use an onion with 2-3 cloves of garlic.

I always buy the neufchâtel cheese because it's lower in fat and doesn't compromise the flavor! They have it at most grocery stores next to the regular cream cheese. Pop it in the microwave to soften it up a bit.