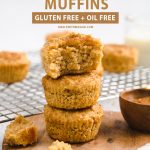 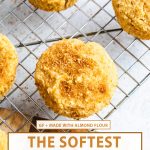 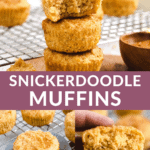 These snickerdoodle muffins are the softest muffins you'll ever eat! Being made with almond flour and Greek Yogurt, its texture is soft and moist. Also they're gluten free!

The taste of the tangy cream of tartar and yogurt paired with the sweetness of cinnamon sugar is one flavor that you won't want to forget.

I'm so excited about this snickerdoodle muffin recipe. I forgot about how tangy and delightful snickerdoodle flavor can be! I tried to make these muffins a healthier version compared to the traditional with using almond flour, a bit of coconut flour and Greek Yogurt. They are so easy to make and only take about 15 minutes in the oven!

What is a Snickerdoodle?

A snickerdoodle is traditionally known to be a cookie, which is made up of butter, oil, cinnamon, cream of tartar and sugar. The cream of tartar (or some recipes use sour cream) gives the cookie its tang. It also helps with the chewiness and overall texture of the cookie. Instead of making a cookie recipe, I created a muffin recipe. I love that they can be frozen for later consumption. The texture is soft, yet still fluffy, with a crunchy sugary topping.

Are these Snickerdoodle muffins gluten free?

Yes! They're gluten free because they are made with almond flour and coconut flour.

Can these be made with any other kind of flour, like white flour or whole wheat?

I have not tested out this recipe using either of those flours. If you do, please leave a comment below and let me know how they turned out!

Can these muffins be frozen?

Yes! You can put these muffins in an airtight bag or container and freeze for up to 6 months. Make sure to remove paper cupcake liner before putting in the freezer though!

How do I store them?

Since these snickerdoodle muffins are so dense and soft, I would recommend putting them in the refrigerator in a Tupperware to store. They will last in the fridge for up to a week.

Don't forget to 'Pin this snickerdoodle muffin recipe' for later!

These snickerdoodle muffins are the softest muffins you will ever eat! Being made with almond flour and Greek Yogurt, its texture is soft and moist.

Store in an airtight container in the refrigerator.

If you love the texture of almond flour in recipes, check out these double chocolate chip cookies!