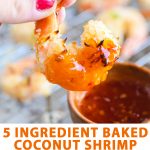 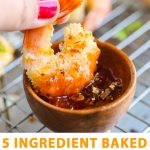 Sean and I went to Florida for my babymoon in early February. Thinking back to those times, it seems like a million years ago when no one was worried about getting sick and life was so different. Crazy that in just two short months everything has changed! Anyways, when we were there I was obsessed with coconut shrimp. I ate it everywhere we went. Not kidding. I loved the flakey crunchy outside with the sweet, yet spicy sauce that came with it. So so good and I wanted to recreate it! So, here is my take on this 5 ingredient baked coconut shrimp recipe with a 2 ingredient coconut shrimp sauce!

How to Make Baked Coconut Shrimp

Traditionally, coconut shrimp is fried. Under the recipe notes below I included a pan fry version if you want to cut down on time. Baked coconut shrimp is healthier for you in that you don't cook at such high heat and create saturated fatty acids.

Normally for breading and frying something, cooks do the F-E-B method, which is flour, egg, breadcrumbs. I cut out a step in this (less cleanup) and combined the flour and breadcrumbs. Really the shrimp don't get 'floured' per say, but they adhere to the shredded coconut and breadcrumbs.

Be sure to check out this video!

This sauce is SO easy and gives a sweet and spicy note to the coconut shrimp! Double it if you're a sauce hog! #noshame.

Can this recipe be gluten free?

How many people does this recipe feed?

How do I reheat this coconut shrimp recipe?

Why do I need to buy tail on shrimp for this recipe?

I hope everyone is staying safe and well during this time! Let me know if you love this recipe by leaving a star rating/comment below! It helps me get noticed in this big internet world!

If you want to fry the shrimp instead of baking them you can heat 2-3 tbsp of oil over high heat and add shrimp, flipping once to ensure proper cooking.

Other similar recipes to this!

« Chicken Pasta Salad
My Second Trimester (We are having a....) »