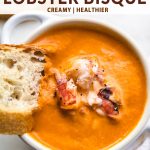 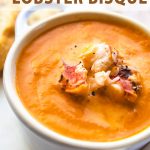 This lightened up lobster bisque is a tad bit healthier than the restaurant version, but still full of flavor. It's got a slight spicy kick to it from the smoked paprika and goes perfectly with a rustic baguette.

We are almost through February! Can you believe it? I can. I feel like this month (and last month) have been creeping. We are closing on our house next week, so I am pretty anxious to make it through the month! More on that in the monthly newsletter, so let's talk about this lobstaaaa bisque! *swoon*

We recently went to Florida last week and I had shrimp or lobster for 90% of my meals. Clearly, I didn't get enough of it because I came home and re-created a lobster bisque that's slightly healthier than the restaurant version.

One thing I will say about this lobster bisque is that it is heavy on tomato. If you are someone who doesn't do well with acidic foods, this bisque isn't for you. I made it so that it can be shared between 2-3 people, but let's be real, you can eat it all yourself if you want 🙂

I've included step by step videos in the recipe card for you on how to cook, cut and get the lobster meat out of the tail. It's actually kind of fun when you get the hang of it and makes you fancy 💁🏼‍♀️

There are other ways to go about cooking the lobster. You can broil it too, but I think boiling is pretty easy and is generally healthier because you don't need the butter to broil.

If you wanted to make this lobster bisque even healthier, you could use extra virgin olive oil or avocado oil when cooking the vegetables instead of butter. You could also use 2% milk instead of half and half, but now we are just cutting too many corners.

I haven't tried this recipe with coconut milk or vegan butter to make it dairy free, but if you do, please let me know!

Hope you love this lightened up lobster bisque!! If you are looking for more soup inspiration here are some fabulous ones...

This lightened up lobster bisque is a tad bit healthier than the restaurant version, but still full of flavor. It's got a slight spicy kick to it from the smoked paprika and goes perfectly with a rustic baguette.

Option to add in corn kernels. It was a nice addition, but definitely not needed.

You can use vegetable broth, but most stores have seafood broth right next to the other broths.

You may increase the amount of half of half if you like more of a creamier bisque. I found ½ cup to be a nice balance without feeling too 'heavy'.

You can find lobster tails at the seafood counter and they normally have specials around holidays. Also if you are a Sam's club or Costco member, they have good deals!

This soup does have a little kick to it with the cayenne and paprika (or at least I think so), so adjust accordingly if you don't like spicy.