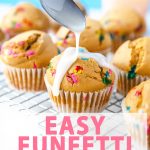 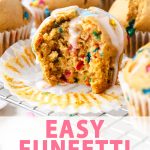 These funfetti cupcakes are homemade, healthier for you and have a super simple glaze on top! This funfetti cupcake recipe is made with greek yogurt, but can be modified to be vegan!

Hey, everyone! I originally was going to post this funfetti cupcake recipe in April, but since quarantine has set in and everyone needs a little bit more happiness in their life, I decided to just post it this week. I can honestly say I haven't used my KitchenAid standing mixer more than I have this past week. 😂 I don't know if it's the pregnancy or just the fact that I'm bored at home and baking sounds like the right idea.

Sean absolutely loves funfetti cake. It isn't his birthday or anything, but funfetti cupcakes are just pretty to look at and make me happy. Plus, I feel like SO many people have birthdays in March/April and have to celebrate at home. No worries, whip up a batch of these homemade funfetti cupcakes and don't feel guilty about it because they are made with good ingredients like greek yogurt, almond milk and coconut sugar. It's a win-win situation.

How to Make Homemade Funfetti Cupcakes

The basic method of baking cupcakes applies here. You want to mix the dry ingredients and wet ingredients together, separately. Then add together in a large bowl. Once incorporated, add in the sprinkles and fold into batter a few times. Do not over-mix because this funfetti cupcake batter is already taught.

Once the sprinkles are mixed in, scoop out batter in each greased muffin tin until all the batter is used up. The recipe makes 12 cupcakes.

Ah, yes. Because what is a cupcake without some frosting or glaze on top? The thing I love about this glaze is how easy and simple it is. Just combine almond milk, powdered sugar and vanilla extract in a bowl and whisk to combine. You can tailor it to your preference of a thicker glaze (more powdered sugar) or a thinner glaze (less powered sugar, more milk). The choice is yours, but I like somewhere between the two.

How to Store Funfetti Cupcakes

I would recommend storing them in an airtight container for 2-3 days on the counter. They start to become dry if you refrigerate them. I also like to heat mine up in the microwave for 15 seconds or put it on some ice cream ❤️ .

I don't know why, but I feel personally connected to these cupcakes 😂 . Maybe because they gave me happiness in a time of uncertainty, anxiousness and boredom. Whatever it may be, I hope they brighten up your day as much as they did mine💕

Don't forget to PIN it for later!

Feel free to leave a comment/star rating/review if you love this recipe as much as I do!

If using whole wheat flour, use 2 cups instead of 2.5 cups.

Can substitute 2 flax eggs for the regular eggs. However, know that the muffins will turn out darker and be less sweet.

Can sub dairy free yogurt in place of regular.

Can swap out 1 cup of sugar for 1 cup coconut sugar.

Make sure to use the correct sprinkles so the color won't bleed - see the above image and link.

For a thicker glaze use more powdered sugar and less milk. For a thinner glaze, use more milk.