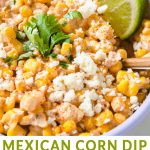 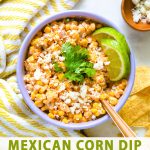 This easy Mexican corn dip (aka elote dip) is so easy to make with canned corn and just a few ingredients! Whip this dip up for your next party or tailgate!

I've been wanting to make this recipe because 1. Sean is allergic to eggs and most elote recipes are mayo based and 2. Cinco de Mayo is in a couple weeks and I want to be FESTIVE. I think we all need some festivity in our lives. Currently it's the end of April and it's snowing here in Michigan, so I'll take any excuse to be festive that I can.

There is some confusion about Mexican corn dip, Mexican street corn, elote, etc... First off, Mexican street corn is commonly called elote and it is essentially grilled corn on the cob covered in mayo, sour cream, herbs, cheese and spices. Sounds delicious, right? Well it's hard to find corn on the cob all year round here in the midwest, so canned corn or frozen corn it is.

How to make Mexican Corn Dip (aka Elote)

This Mexican street corn dip could not be easier to make! Throw everything in a bowl and mix to combine!

Combine the sour cream, spices, lime, red onion and cilantro in the bottom of a large bowl. Whisk to combine. Next, drain and rinse the canned corn and place in bowl. Slowly fold the corn using a spatula. Top with more cotija cheese, cilantro and lime juice as desired!

I recommend serving this Mexican street corn dip cold. The flavors are more robust and the lime really shows through. You can eat this dip multiple ways...

Hope you guys love this recipe as much as I do! Please leave a star rating/comment below, it helps my business get noticed in this big internet world!

This easy Mexican corn dip (aka elote dip) is so easy to make with canned corn and just a few ingredients! Whip this dip up for your next party or tailgate!

Can use frozen corn if you don't have canned corn. Even better to use corn freshly cut off the cob after cooking.

If you don't have fresh cilantro, just omit rather than using dried.

Can swap in same amount of plain greek yogurt in place of sour cream if you wanted.

If you don't have a red onion, yellow or white onion will work.

Check out these other recipes for your next Cinco de Mayo party!