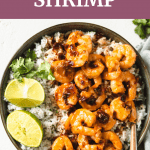 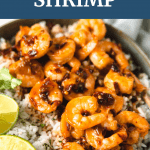 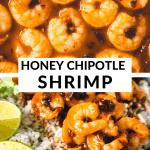 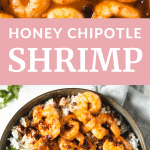 This honey chipotle shrimp with cilantro lime rice is an easy dinner idea that is a tantalizing combination of sweet and spicy. The dish has all the parts you need to make an epic meal; salt, fat, acid and heat.

I don't know what it is about my love for shrimp. I have so many shrimp recipes here on my blog like this 5 ingredient coconut shrimp or these easy shrimp tacos. Shrimp is the quickest dinner to me. Unlike chicken, I don't need to trim any excess fat on a cutting board and shrimp is always in the freezer (at least at my house).

Plus, it cooks in about 5 minutes! What is better than that?

This honey chipotle sauce has got me swooning too. Once it sits for a bit ( or with leftovers) the sauce thickens up and becomes more of a glaze. It's magical.

Please let me know if you make this recipe! I would love to hear any modifications you made or other creative ways you serve it!

These chipotle peppers can get HOT. I would recommend of chopping 2 peppers if you don't like it "spicy." The adobo sauce has a lot of flavor in it as well so you can always add more of the sauce or more coconut milk to balance the heat.

FYI, you might not think you need the coconut milk but it tames down some of the spiciness from the peppers and gives the sauce a smooth rich texture, that I love.

What Shrimp to Buy?

I always buy raw frozen shrimp. Sometimes I buy it with tail or without depending on the presentation of the food 😂 . If all you have is tail on, that's ok just makes you have an extra step to de-tail the shrimp prior to placing it in a bowl with the sauce.

Once the shrimp is cooking in the saute pan, the heat will bubble up the sauce (you want that!) because you had raw shrimp in the sauce, it kills any bacteria that may be lurking.

The heat also thickens the sauce giving it that creamy texture.

FYI, you might not think you need the coconut milk but it tames down some of the spiciness from the peppers and gives the sauce a smooth rich texture, that I love.

The contrast of the rice and sauce pair well and helps to neutralize the spiciness of the sauce a bit.

If you didn't want to use white rice you can sub brown rice, wild, long grain or maybe even a couscous variety!

Other Ways to Serve

A few other ideas on what to serve this shrimp dish with could be...

Hope you guys love this honey chipotle shrimp recipe as much as I do! Don't forget to PIN IT for later and tag me in any creations! @mealswithmaggie or hashtag #mealswithmaggie

This honey chipotle shrimp with cilantro lime rice is an easy dinner idea that is a tantalizing combination of sweet and spicy.

You can find chipotle peppers in adobo sauce in most grocery stores near the international foods.

I used white rice but you can definitely use brown rice, couscous, long grain, wild or any other rice variety.