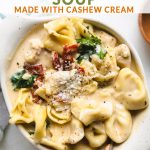 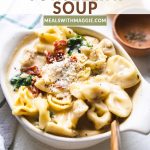 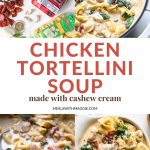 Creamy chicken tortellini soup is a great weeknight dinner dish that feeds a crowd! It's also healthier, as it's made with cashew cream instead of heavy cream.

Despite it being mid-May, this past week or so hasn't been that warm! I made this soup a couple weeks back and the comforting tortellini warmed my soul and brought me back to life!

Sean is a big tortellini fan. I hadn't really played around with it much until I started to test out this chicken tortellini soup.

Traditionally, creamy chicken tortellini has heavy cream or half and half in it. I tried multiple methods, including 2% milk and it just wasn't working for me.

It wasn't until I tried using cashew cream that I really got the creamy velvety texture I wanted.

How to Make Chicken Tortellini Soup

You can follow this step-by-step video to learn how to make chicken tortellini soup.

First, you will need to soak the cashews in hot water (or broth if you have extra)

Next, saute the garlic and onion. Add in the chicken and Italian seasoning. Let it cook for 2-3 minutes. Then add chicken broth and cover with a lid.

When the soup comes to a boil, add in the tortellini and cook according to package instructions (generally 7 minutes or so) at a boil.

While the soup is cooking, blend the cashews and water together in a high speed blender.

Once the 7 minutes is up and tortellini is cooked through (I would test one just to be sure!), add in the cashew cream, spinach and sun dried tomatoes.

The soup will become thicker after it sits in the fridge. You might need to add more chicken broth to thin it out before re-heating it!

Is this a healthy chicken tortellini soup?

If I had to answer this question simply, I would say yes. It's made with low sodium chicken broth and cashew cream to help cut down on saturated fat that you would expect from half and half or heavy cream.

By adding chicken to this recipe, the protein per serving comes out to about 30 grams. This is a great amount for a well balanced meal!

Check out these other great chicken recipes!

Hope you love this recipe as much as I do! Be sure to leave a star rating/review in the comment section! It helps me get noticed in this big internet world!

Creamy chicken tortellini soup is a great weeknight dinner dish that feeds a crowd! It's also healthier, as it's made with cashew cream instead of heavy cream.